Justin Bieber in Love (Again?) on Instagram. It seems Justin Bieber can’t stand still – he’s always doing something. Instagram has witnessed him do many crazy things. We thought the last one would be falling in love with a mysterious girl he saw on the picture-sharing network. It seems that he’s already forgotten her – or is pretending to do so – and replaced her with Kourtney Kardashian. Why? We should go back a couple of times so that everything makes sense. 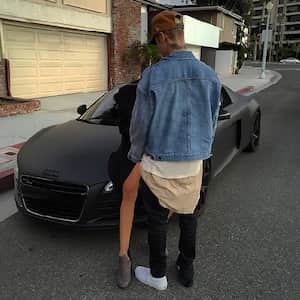 Justin (@justinbieber) and Kourtney (@kourtneykardash) stopped seeing each other in October. They used to be friends, or so they said. That’s why they went together to an amusement park and then to a club, from which they didn’t came back until it wasn’t late night. That’s the last time the media knew anything about them. However, a couple of days ago, they were seen in LA in a karaoke.

That’s not the best part of it, though. Justin Bieber has shared a picture of him standing next to a car and next to a woman. Justin is giving his back to the camera while we can only see the right leg of the girl. Many have said that it must be Kourtney, not because of the leg shown but of the caption next to the picture. “Lord knows.” Some say that Kourtney’s ex boyfriend’s nick is “Lord Disick” so this could be a hint to him.

There are, of course, people who say that the legs seen in the picture are photoshopped. Would Justin really have to do so? They have been seen together this week, so it wouldn’t be strange that it were true. Some media say that they are more than friends, but that they don’t want any serious commitment. Despite all the pictures on Instagram, Justin wants to get back with Selena. Do you think he’ll be able?

Meet Instagram Husbands, the Men Behind those Great Pics