Instagram is the perfect place to show others how you enjoy life, to inspire and to encourage others to have a healthier lifestyle. However, as it gained popularity it made some kind of pictures popular. Since 2010, how many photos have we seen that depict a perfectly arranged dish? How many times have we faced pictures of young beautiful people behind a filter? It was one of the main features of Instagram, but now they’re everywhere. That’s what young artist Amalia Ulman wanted to show Instagram users – and she did it quite well. 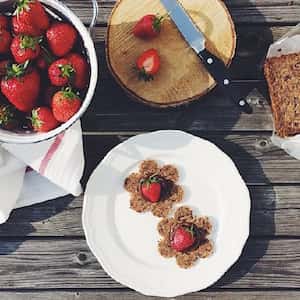 and she did it so well that the series of pictures she uploaded is going to be exhibited at the Tate Modern art gallery in London. Everything started when she uploaded a picture at @AmaliaUlman, her Instagram account, in April 2014. It was a white background and a black text: “Part I,” accompanied by the caption “Excellencies & Perfections.”  From there on, she started posting pictures that didn’t look strange on Instagram: her breakfast, kittens, flowers and, of course, selfies in which she was only wearing underwear. Every image was a prototypical Instagram picture.

Then she started gaining followers and even some haters, who would criticize each photo she uploaded, filling it with unpleasant comments. Even though, her follower count rose and rose. Five months later she revealed the truth – everything wasn’t but a performance, a farce, a role that she was playing. Her aim was to show how ridiculous the stereotype of the modern woman is.

Firstly she interpreted a girl who had moved to LA before  breaking up with her boyfriend; then she imitated the lifestyle of the Kardashians and other American celebrities; finally she showed her recovery process, with yoga poses and pictures of healthy food.