A Father Turns His Son’s Drawings into Instagram Marvels. Tom and Dom Curtis are a father and a son who have become quite well-known lately. Dom is currently 7 and Tom is working for a media agency in London. Since some months ago, they’ve been posting together onto one Instagram account which has become extremely popular. Their premise? Curtis tries to recreate what his people saw and drew in the most realistic way possible.

The first picture uploaded to @thingsihavedrawn was a “portrait” of the family cat, which was then followed by the more than 100 posts the account currently hosts. “I’ve always foud the way children see stuff fascinating and strange. My son’s drawings are simple and there’s not a worry about them turning out well or badly. That’s how creativity should be in a kid.” This creativity has made the account go from 100K to 500K followers in just a week. 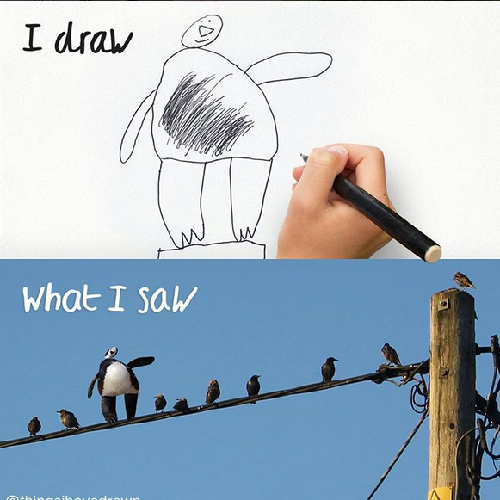 The world seen through a child’s eyes

However, what Curtis, Sr, likes the most about the experience is not the followers – it’s being able to send time with his son, working on new drawings and seeing his imagination and creativity grow. His both children, Dom and Alistair, have contributed to the account with their drawings. They start drawing on paper, with pencils, then their father transforms the drawings using Photoshop. “I studied Art at college, I should be better at it,” he says.

Curtis didn’t know anything about similar works when he started this project, but has come to know some since that moment. He is really fond of soft toys made to look like exact copies of children’s drawings. “I think they’re great.”

Normally it’s Dom who chooses the topic, which tends to be a thing that he’s seen in real life, although they have planned to do monsters and spaceships in the future. Dom has already drawn everything – now it’s time for Tom to find some time and get to it.