May the Force Be With Instagram. The entire world is excited about the most important cinematic event that has taken place in recent times. One of the most important cinematic sagas is getting a new dawn today. From 1977 to today, millions of people have been fascinated by the now seven Star Wars movies. As they have entered the world again, they’ve met all the new things that weren’t there back in the 80’s nor in the 2000’s – Star Wars meets Instagram. 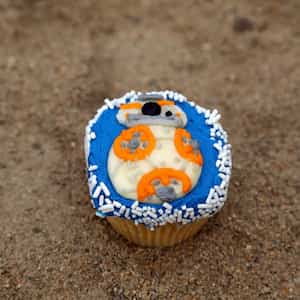 No spoilers, only cupcakes

At 1,413 posts and 2.6 million followers. It’s clear that the release of the new films has helped an already popular account get more and more widespread. The very last post shows us a very short trailer reminding us that the film was released yesterday. But there’s much more.

There are droid-shaped cupcakes, pictures of the cast attending the world premiere of three days ago, original pictures of the 1977 cast (you can see Luke, Leia and Han smiling – Chewbacca seems a little concerned), pictures of cosplayers and promotions and quizzes.

Themost you’ll see, if you focus on the latest posts, are references to the release of the new movies. They’ve been a very important part of the account since they were announced, and now that they’re one of the hottest topics it’s normal that the account managers want to take advantage of it to get it more and more visible.

Whether you’re going to watch the new films or not, it’s a great opportunity to follow an account which will surely upload content that will interest you – as long as you’re a Star Wars fan. If you’re not a Star Wars fan, maybe you’ll start to be once you’ve hit the “Follow” button.

Enjoy Star Wars, enjoy Instagram and may the Force be with you.

Pop Art Was Never So Pop Until It Came Across Instagram