Let Daddy Pay and Let Me Show It on Instagram. Rich Russian Kids (@richrussiankids) is faithful to its name. It is not the name of the latest Adult Swim comedy, but an Instagram profile followed by hundreds of thousands of people. There, they can see how the offspring of Russian tycoons enjoy a lifestyle that many of us couldn’t even dream of leading. No matter the recession Russia has been experiencing since 2014, no matter the devaluation of the ruble, no matter the country is getting poorer and poorer – these kids won’t let this sort of things ruins their day. 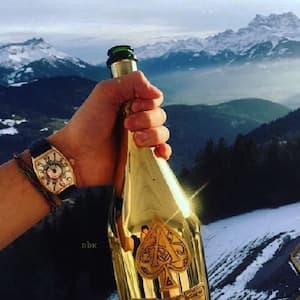 Champagne and luxury watches, two mandatory features in this account.

They are known as the “golden youths” in Russia

but what are they exactly? They’re actual spoiled kids, children of the most important businessmen in the country. Their hobbies? Cars, paradise-like destinations, literally decks of credit cards… They have no limits. And, apparently, they are not ashamed of displaying their wealth. Apart from cars, they also fancy luxury watches, clothes from the most exclusive stores and money itself. We can see them posing holding wads of cash (hundreds of euros or thousands of rubles, as you wish), getting in or out of a casino or a hotel, sunbathing, bathing or admiring precious jewels.

Bikinis, champagne, swimming pools, saunas… While Moscow is currently at 36º F (2 °C), they can be posing on a Caribbean beach, wondering what the weather is like in their own country.

The account was created in September 2015 and to the day it is followed by 277K people. It was inspired by another Instagram account, Rich Kids of Instagram. Which has turned out to be less popular than its Russian version, having “only” 239K followers.

Among the people who appear in the pictures is Vladimir Putin himself. He was once invited to a party by these kids and even took a selfie with them.