Instagram in Love with a Giant Dog. As we saw when talking about Coby the cat, animals can mean success for many Instagram users. Many people’s pets turn into amazing stars on the Internet, especially on webs like Instagram, where they can be seen by millions of people. Apart from those who enjoy showing us pictures of their pets, there are those who take a step further and just do things one would never have thought. 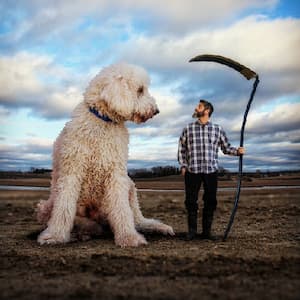 Line and Juji spending some time together

a man from Minnesota whose dog, Juji, has become an Internet star. Because Juji is the real star featured in Cline’s account, not only because of its cuteness, but because — it’s gigantic! Nearly 45K people have seen more than two thousand pictures Cline has uploaded to Instagram, in which he photoshops his dog to make it look 8 feet tall or more. It depends on the day.

Everything started because Cline is in love with photography editing. He started as a painter, but now he’s more of a graphic designer. He comes from Virginia but lives in Minnesota, and he only wanted to create some funny images to upload to his Instagram account. That’s when he started playing and photoshopping, but everything turned out differently.

He didn’t upload so many photos at first, but people encouraged him to do so. They loved to see giant dogs around. Cline says that it was going to last only for a couple of weeks, and it’s been a year now. What he spends most of the time doing is calculating the position of everything in the picture, and also the amount of light.

Both Cline and Juji have learned a lot from each other, and they have become closer than ever thanks to this project. Would you try and become the owner of a giant dog (if only thanks to Photoshop?).