Indignation Sweeps Instagram due to Auschwitz Pictures. Going to a place like Auschwitz to take bland pictures can have its consequences. Rubén Domínguez is a Spanish fashion specialist – as he describes himself on his Instagram profile (@ruben_dominguez94) – who has received a ton of criticism on social networks. The reason? As you may have guessed, he took pictures of himself with an haute couture bag at different spots of the former Nazi concentration camp, in Poland, where a million people were murdered during WWII.

The images, that are no longer uploaded on Domínguez’s profile, were titled “Auschwitz Day,” “Street style in Auschwitz” and so on. They had several hashtags such as #Gucci, #fashion, #menwithstyle, #influencer, etc. In the pics, the Spanish youth is seen posing with brand clothes and bags in the most well-known places in the concentration camp.

Some social-network users in Spain and the rest of the world have answered either with a grin or with indignation. “When you go to Auschwitz to be the cool kid and upload your cool pics,” “When you visit Auschwitz and your bag is full of rocks,” or “Everyday Auschwitz hashtags” have been some things Twitter users have said about Domínguez’s photo shoot. 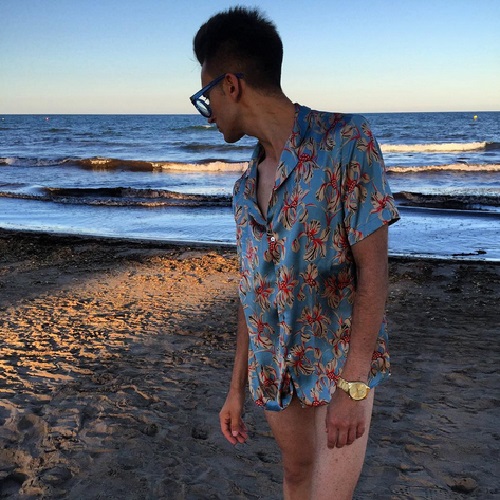 Many more, especially those working for the “serious media,” have criticized Domínguez’s frivolity and lack of tact. Some have taken these pictures as an example that youngsters are becoming more and more indifferent to alien human suffering while defending animals or noble causes.