Selfies with Animals, a True Instagram Story. Fashionable since some time ago, selfies have gone a step beyond. If you don’t think so, ask Allan Dixon, a 29-year-old Irish man who has been adding a new ingredient to the pictures he takes of himself. Apart from appearing on them, he lets others be photographed too. However, they’re not his family or his friends – they’re wild animals. 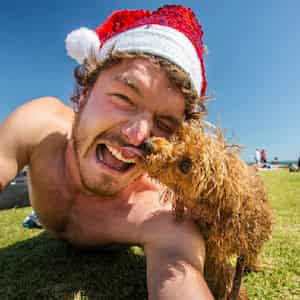 One of Dixon’s latest pics.

Dixon loves traveling, and as he normally travels to places where wildlife is in direct contact with tourists, he takes those opportunities to take pictures of himself together with some animal from the place he’s visiting. Not everything is as easy as it may seem at @daxon, his Instagram profile, although we suppose he must have gotten some practice to take more than six hundred pictures of animals. Nearly 80K people follow him and many others are starting to imitate him. Taking selfies with animals is becoming fashionable.

Time should not be a constraint: sometimes he must prepare the picture for five minutes; some other times, it’s three whole hours that go in taking just one selfie. It depends, as he says, on the animal and on how safe it’s feeling at the moment. He also says “Don’t focus on clothes when taking selfies,” as he is normally full of dirt from being on the ground. However, he says, it’s worth the effort.

If you want to emulate be aware that you must be very careful so that you don’t provoke or irritate the animal you’re trying to take a picture with. You must make animals trust you by having a calm attitude, that’s when results are going to be amazing. His last recommendation is to “make sure that the animal you want to photograph is not a crocodile.”