Hijarbie, the Muslim Barbie Which is Driving Instagram Crazy

Hijarbie, the Muslim Barbie Which is Driving Instagram Crazy

Hijarbie, the Muslim Barbie Which is Driving Instagram Crazy. We can’t help to be amazed by Barbie. She’s had nearly every job in the world, she’s lived everywhere, from the Caribbean to NYC, she’s been admired by girls all over the world for the last half a century. Having this history behind, it’s not surprising that she has now chosen to wear a piece of clothing that had been underrepresented in the doll’s lifestyle – the hijab. 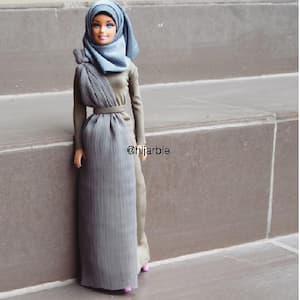 Hijarbie the Muslim Barbie, whatever she wears, Barbie is always stylish

That’s a good reason why Barbie has been chosen to wear this kind of clothing. Just a few weeks ago, Dolce & Gabanna launched its own hijabs and abayas. Now, @hijarbie vindicates the right of women wearing Muslim clothing to feel good with themselves and see themselves represented.

This project, which is already followed by more than seven thousand people on Instagram, having posted only 39 pictures, was born from the mind of Haneefah Adam, a Nigerian woman who was inspired by another Barbie Instagram profile, @barbiestyle, where we can see the doll in her “everyday lifestyle.”

Adam started to think that she’d like to see a Barbie doll dressed as she did. She thought that this would promote her culture and religion, and could teach the world that being demure could also mean being elegant, fun and stylish. It’s a way that Muslim girls can become more self-assertive, more self-confident. Instead of seeing dolls clothed unlike they themselves would be, they can identify themselves with the doll. According to Adam, this would have a very positive impact on young Muslim girls. They’ll be able to feel that they fit in.

It’s the last thing Barbie has made to adapt herself to any lifestyle. We’ve seen slim and big Barbies, tall and short ones, normal ones and some that lead adventurous lifestyles. What will be the most famous doll’s next step?