If You Look Like Taylor Swift, Don’t Get Into Instagram. Taylor Swift is a well-known artist, that is undeniable. She has legions of fans and also many haters. It’s normal, whenever a celebrity gets famous, they attract both positive and negative reactions from the world. However, if you’re not used to being a celebrity and have no reasons whatsoever to like it, but end up experiencing the trouble celebrities do, that’s the worst. 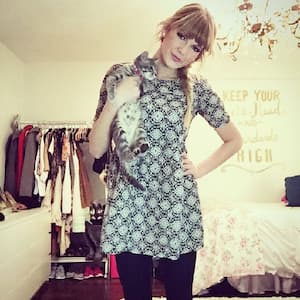 Why are we telling you all this?

Because of Taylor Swift – and because there is one copycat of her that has gone viral on Instagram recently. Her name is Keitra Jane, and her Instagram account, @keitrajane, is being followed by almost 20K people – but this popularity has meant much trouble for her. She looks so much like her that people have started criticizing her – for that! They call her the “fat version of Taylor Swift” and “Taylor with bigger breasts.”

Of course, Keitra was not at all amused by this. She’s suffered eating disorders during her life, and she’s been so upset by these comments on her looks that she’s decided to turn herself into an activist against cyberbullying and teach people the consequences this behavior has in people’s lives. She asked people to use social media to do good, not to attack each other. Furthermore, she encourages those who don’t swear, those who smile, those who keep free from negativity.

Looking so much like Swift has allowed Jane to be known and spread her message of love throughout the net. Body positivity, empowerment and self-awareness are ideas that she is constantly praising and defending. As a woman who has fought her whole life against society, she knows that the battle is not over yet, and she will keep fighting till she can say the world is a better place.