Instagram, Home of Celebrities’ Copycats. Angelina Jolie doesn’t have an official Instagram account. However, this doesn’t prevent her fans from following her fan account, a profile full of old pictures of her. @angelinajolie_offiicial is now followed by 3.3 million people, having almost a thousand pics of Jolie. While she doesn’t make a decision regarding opening an account on Instagram, her fans can follow this fan account or choose Chelsea Marr (@chelsealmarr), who, apart from being only 24 years old, is an exact copy of her. 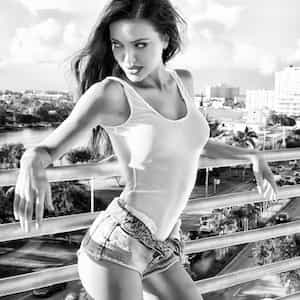 The resemblance between this 24-year-old woman and Angelina Jolie is astonishing: sensual lips, clear eyes, a similar haircut and even the shape of their eyebrows. As the media took a look at her, she had to deal with it. She even had to clarify things on a Facebook post. She’s not a model, but a manager for a gas and oil company; also, she had to talk about the operations she underwent. She didn’t have them done in order to look like anybody. Likewise, she’s improved her lips, her nose and her breasts – but just for herself.

Jennifer Lopez, Ariana Grande, Kim Kardashian or Katy Perry have also found exact copies of themselves on the net. Jessica Burciaga (@jessicaburciaga), who looks like an exact copy of Lopez, has even appeared on pictures wearing a dress similar to the one Lopez wore to the Grammys in 2000.

Finally, we have Jimena Sánchez (@jimenasanchezmx) who is called the Mexican Kim Kardashian – no wonder why, just look at her pics. She has almost a million followers and she even spoke on TV – where she works as a sports anchor – about the resemblance between herself and Kim Kardashian.