Manny, the Selfie-Lover Cat of Instagram. Cats have always been the rulers of Instagram, no one doubts it. They’re the star animals of the most important photography-related social network, but they’ve always depended on humans to get to the Internet. Until now, no cat was ever able to take a picture by itself – but now there is one that not only takes pictures, but also takes selfies. Its name is Manny and you can follow it on @yoremahm. 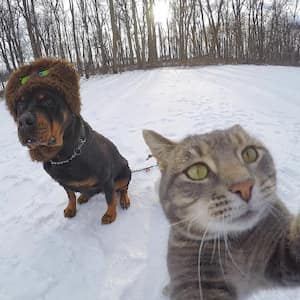 It’s 200 people away from 100K. How did Manny get to gain so many followers? The answer is his ability at taking selfies. How does he manage to do it? The manager of the account says that Manny is mesmerized by GoPro cams. He presses the buttons with its paw while looking at the lens.

What are Manny’s favorite places? It really seems to enjoy snow. The first pictures we can see of it – both selfies and pictures taken by (we suppose) its owner. He also enjoys the company of other animals, such as two rottweilers he often appears in frame with, but also horses and other cats – and even a donkey. It not only appears on pictures with them, but also on video. There are short clips showing how Manny lies on the grass, how it enjoys sunlight hitting its back, how he hides into a bunch of fallen leaves…

There are 438 pictures and videos, so that cat lovers can have their dose of feline happiness. Among all the Instagram accounts featuring animals, this one is certainly one of the most original ones, not only because of the beauty of the landscapes and animals featured on it – there are no humans on sight – but also because of this cat’s ability. Let’s hope he finally learns how to upload them to Instagram. That would certainly be worth watching.